Last month, a mule deer which was hit by a car in Grand Teton National Park, just south of Yellowstone, tested positive for the disease. There is no known cure for the malady which can live in the soil and be transmitted to animals for years.

That could be bad news for Yellowstone which has two big drawing cards, thermal features, and animals. Park officials say there’s no certainty that CWD will devastate popular elk and deer herds in the park and reclusive moose populations. But Montana’s Department of Fish, Wildlife and Parks (FWP) reports that after the disease struck in Colorado, mule deer populations decreased by 45% over 20 years. In the same report, FWP says Wyoming saw a 21% decrease in mule deer herds after infection there.

If similar population declines were to be experienced in Yellowstone National Park, visitors would almost certainly notice a change. “It is concerning to Yellowstone and Yellowstone biologists. So much so that we do have a plan in place,” said park spokesperson Morgan Warthin.

A summary of that plan can be found on the park website. It details everything from increased testing and observation of animals once the disease appears in the park, all the way to killing and removing infected animals.

Last Friday, visitor Nancy Andrew of Perrysburg Ohio trudged through the snow along Soda Butte Creek, just east of the Lamar Valley in the northeastern part of the park.  She had just finished taking photos of several moose which were grazing on willows along the creek. “That’s one of the two winter animals that I want to see that I haven’t seen,” she said. 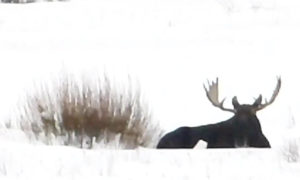 Andrew says seeing animals in the park is the top draw for her, and she’s well aware of the danger posed by CWD, saying it’s important for the park to act quickly once the disease is encountered. She added, “Because once it starts, there’s nothing that we can do about it.”

In nearby Grand Teton National Park, spokeswoman Denise German said: “We’ve been doing some intensive surveillance, which is basically testing animals. And that’s testing the road kill, the dead animals that we find throughout the park.”

Yellowstone spokeswoman Warthin said the park is trying to get ahead of CWD by using some new tracking techniques. She said, “We’re also monitoring radio-collared elk and mule deer to understand their movement, to be able to anticipate the possibility of the spread into the park.”

Once CWD gets into Yellowstone, and everyone we spoke with thinks it’s inevitable, the parks plan moves up a notch. There will be more testing. And the public will be asked to help.

“We always encourage visitors too to let us know when they’re seeing an animal that may not look very well,” said Denise German at Grand Teton.

Besides increased monitoring, the plan for Yellowstone is to dispose of infected carcasses as quickly as possible because the disease is easily transmitted to other deer, elk or moose that may visit the site. One of the ways the park plans to do that is to move diseased corpses to areas where predators will quickly consume the remains. The Yellowstone report said, “Selective predation and scavenging could remove a greater proportion of CWD-infected animals than culling or harvest and dilute environmental contamination and suppress CWD prevalence.”

However, the park is also prepared to cull infected animals. Once CWD levels infect 5 percent of male and 2-3 percent of female animals, the report said: “We would consider the science and technology available at the time to decide whether to implement actions to maintain prevalence below these thresholds, which may include practices such as selective culling.”

But, all of this is expected to play out in slow motion because the disease progresses steadily, though slowly. The report said, “We will measure CWD prevalence over 5- to 10- year horizons given the slow progression of CWD epidemics.”

Scientists say CWD can remain at low levels for decades, though it has moved more quickly through deer and elk populations in some areas.

Officials say there is no evidence CWD poses a risk to humans, but the Yellowstone report recommends against human consumption of meat from an infected animal and meat from any infected animals found in the park will not be donated to food banks.

Yellowstone is also taking steps to keep contamination out. Yellowstone prohibits: “The transport of heads and spinal cords from deer, elk, or moose through the park if they were harvested in a state or province with CWD diagnosed in their wildlife populations.”

If Rocky Mountain National Park in Colorado is an example, then it could be decades before there are noticeable population declines once CWD is detected in the park. And there’s a chance that Yellowstone’s unique mix of large predators and prey will actually protect the park from a disease that can be devastating to some species.