BUTTE – Rahim AlHaj played at the very first festival when it was the National Folk Festival in 2008. Returning for this year’s event, he discovered Butte people have great memories.

“The first minute I entered the hotel, the lady working for the festival said “oh Rahim!’ she gives me a hug. This is 12 years ago, you know,” said AlHaj.

Rahim and his trio will perform Middle Eastern music. He said he loves music because there’s not a language barrier.

He will perform music he composed for a record called “One Sky,” because he believes we are all the same under the sky.

“There’s nothing such as thing as African sky or Asian sky or Iraqi sky or American sky and all the humanity lives under this one sky,” said AlHaj. 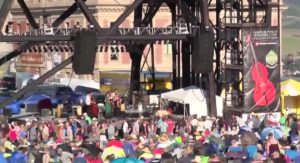 He adds that he really enjoys the people living under this one sky in Butte.

“The nice people, always smiling, people that are so sweet and wonderful and welcoming, it’s like crazy and wonderful, it’s beautiful,” he said.