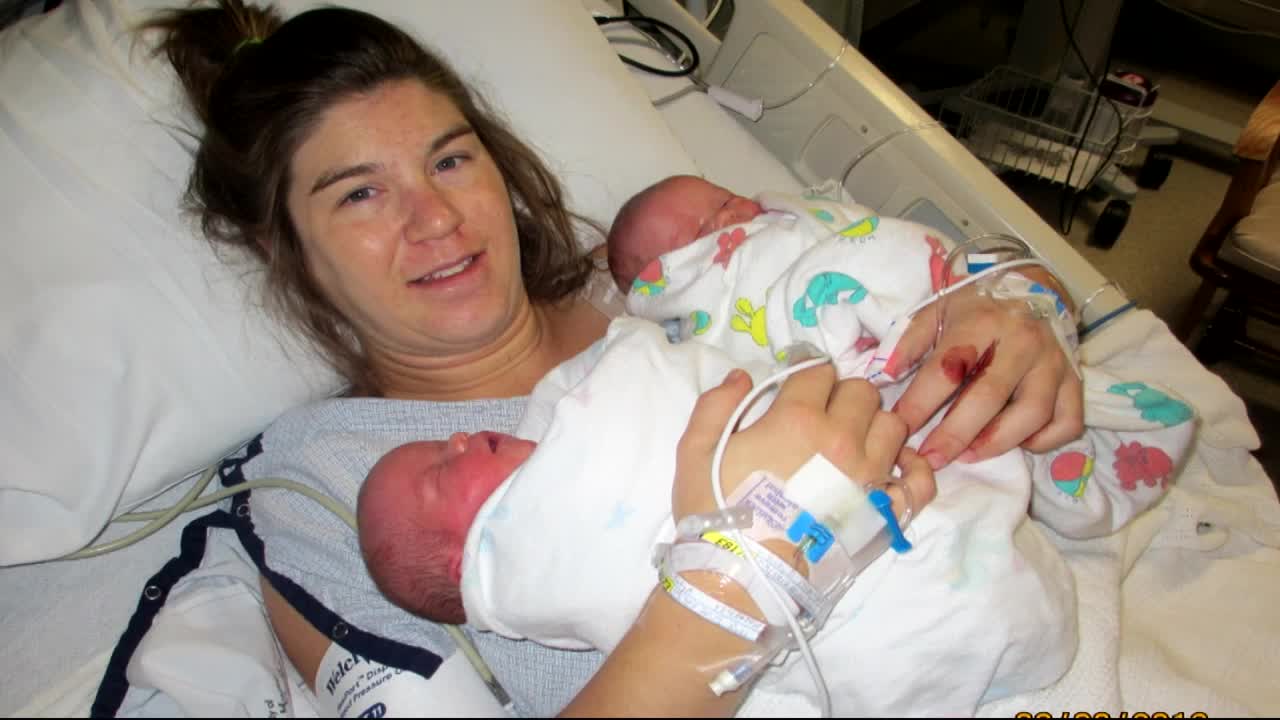 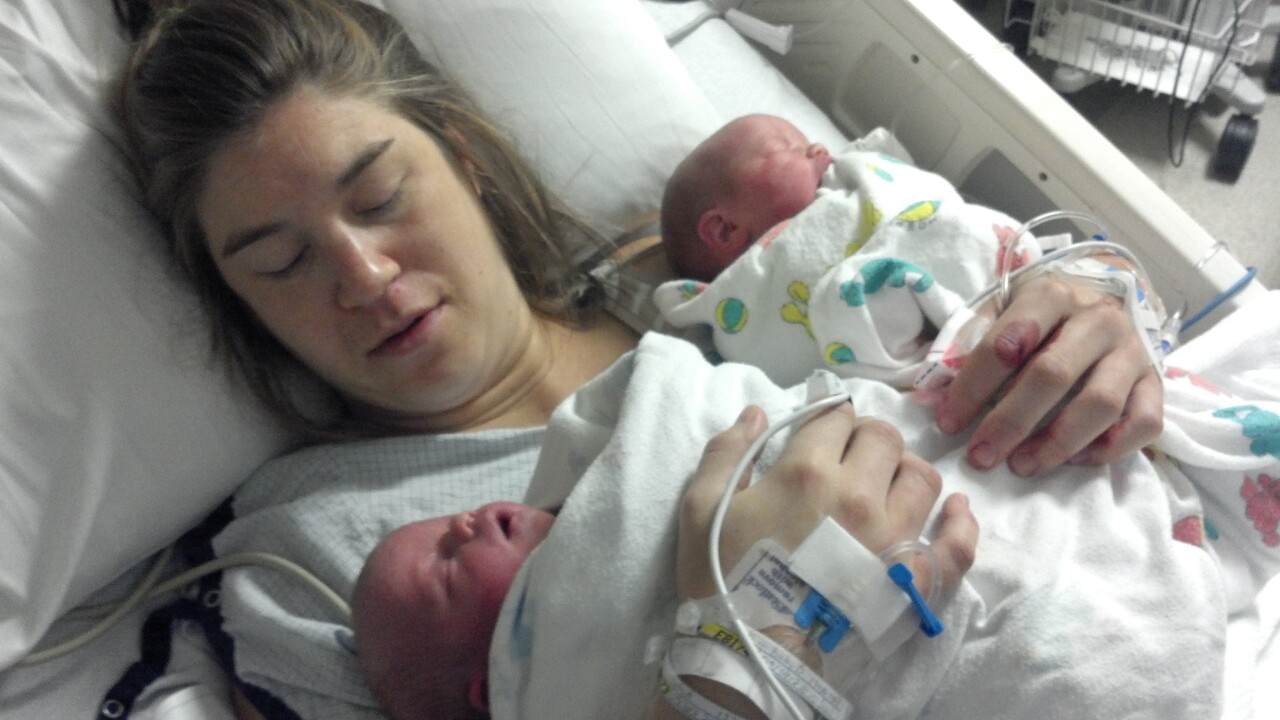 BILLINGS - You can find Tessa Jochim at the gym six days a week.

“Being exhausted from working out is the best part of my day,” Jochim said.

It’s not just for her physical health, but for her mental health too, and her twin girls, who she had a hard time bonding with, when they were born almost eight years ago.

“You hear about women’s stories of, Ooh, I was so in love the second they were born,’ and I did not feel that way. It was like ‘get them away from me, I don’t want to hold them.’ It was awful. I felt like a bad mom,” said Jochim.

Like 15 to 20 percent of new mothers, Jochim was diagnosed with postpartum depression.

“You don’t know at the time. Your emotions are all crazy, your hormones are all crazy. You hear all of these other mom stories and it’s hard, especially because you feel like…I felt like I missed out on some things with them when they were really little,” Jochim said.

Motherhood was something she always wanted, but an unexpected turn in her pregnancy gave doctors no choice but to perform an emergency c-section.

“It was really scary. And that was kind of what started my postpartum depression, because I didn’t feel like I had any children. I woke up and I had babies and I didn’t know why. I didn’t get to experience that where most women do, where they’re awake for them, and they lay them on your chest, and you get to bond with them right away. They had taken a bath and were wrapped in a blanket when I first saw them. So I didn’t get to see that, or have that immediate bond with them. And that just kind of snowballed my postpartum depression into what it became,” she said.

She had open and honest conversations with her doctor early on, who prescribed antidepressants. Reluctant to take them at first, it was another coping mechanism that brought her balance.

“I didn’t really want to take antidepressants. That was kind of something I fought for a little while. Because there’s such a stigma to that, even though it’s postpartum depression. But when I started exercising, and I started feeling better, and that combination with the antidepressant, that was the winning combination. Then I did feel better. It was like, ok, and especially having that moment where I remember, I want to go hold them. I felt like, ok, it’s going to get better from here now, it’s not going to be like this forever, it will get better.”

She was seeing Dr. Chimene Dahl at St. Vincent Healthcare, who says mental health issues don’t just present themselves after the pregnancy, they can happen before birth too.

“Postpartum depression is something that can happen to anybody in any pregnancy, at any time. Whether it’s in the pregnancy or in the postpartum. So, the sooner that we can make that diagnosis, the sooner we can get a patient working on therapies to help, whether it’s just taking better care of themselves, getting time to rest, or, counseling, or medical therapy sometimes are necessary,” Dahl said.

Symptoms can range from having problems bonding with baby, or neglecting self-care, loss of interest in activities, or unwanted thoughts.

“I think ladies are embarrassed sometimes to talk about their symptoms to family and friends, so then they start to spiral down in terms of their mood, and then the longer they stay like that, then of course the worse it gets,” Dahl said.

A series of follow up appointments are made for new mothers in the weeks and months after delivery, giving them the chance to reach out for help, if they need it.

“Our whole goal is to eventually have women come and talk about being down or depressed, the same way they would if they had a sore throat, or cold. It’s about normalizing it and making sure that women know that it’s a part of their health, just like their physical health,” said Amanda Wiley, certified nurse mid-wife and a women’s health nurse practitioner at St. Vincent Healthcare.

Earlier this year, St. Vincent Healthcare created a new care coordinator position to help those new moms with things outside of medical care, like transportation, food, housing, insurance, and counseling.

“We want moms to be as healthy as they can be, and if they’re not feeling good themselves, then that’s harder on baby. So, if we can help them get all of their needs, all of their basic, their stable needs,” said Mandy Reinhart, St. Vincent Healthcare’s new care coordinator in the midwifery and women’s center.

“By treating the depression and anxiety, they’re finding that later on, kids are actually not becoming anxious and depressed themselves, and they don’t really know what the correlation is there yet, but they’re seeing it less and less generationally, if we’ve treated it throughout pregnancy,” said Tiffany Stensvad, a nurse midwife at St. Vincent Healthcare.

In a world where women try to do it all and achieve that "super mom" status, it’s also a chance for family and friends to create that supportive network.

“Being a super mom doesn’t mean you have to do it all alone. It doesn’t mean that you should try to tackle everything on your own. We just, in general, don’t ask for help very often. There is often either a partner, a grandma, an aunt, friends, that really will step in and help. That’s not at all a weakness for them to have to ask for help, it really does take an entire community and family to do this most of the time,” Stensvad said.

Now Jochim, 35, is enjoying life with her family, and she encourages other moms who are feeling something’s not quite right, to take that first step and reach out.

“Knowing that there’s nothing wrong with you, it’s a medical thing. You might need medication. You might need a combo of maybe some exercise, maybe a church group would help someone. Maybe the mom’s group would help. And talk to somebody, tell someone. Because I didn’t want to tell anybody, I didn’t even want to tell my husband about it. But my mom and I talked about it a lot. Dr. Dahl and I talked about it a lot. And I think talking to them, knowing I’m not weird, knowing I’m not a bad mom, that’s something that needs to be talked about, and it’s just not,” she said.

And as the world deals with a pandemic, it's adding to the stress, anxiety and depression for some moms-to-be.

Medical workers report seeing more mental health issues among new moms, so they are encouraged to be open about their feelings and get help.

Spouses and family members should also be on the lookout for any changes in behavior.