During 2018, 11 of 12 monthly global land and ocean temperature departures from average ranked among the five warmest for their respective months, giving way to the fourth warmest year in NOAA’s 139-year record. The years 2015–2017 each had a global temperature departure from average that was more than 1.0°C (1.8°F) above the 1880–1900 average, which is a period that is commonly used to represent the pre-industrial conditions. However, 2018 was just shy of reaching the 1.0°C (1.8°F) mark at 0.97°C (1.75°F). The year began with a La Niña episode present across the tropical Pacific Ocean, transitioning to ENSO-neutral by April 2018.

2018 also marks the 42nd consecutive year (since 1977) with global land and ocean temperatures, at least nominally, above the 20th century average. During the 21st century, the global land and ocean temperature departure from average has reached new record highs five times (2005, 2010, 2014, 2015, and 2016), with three of those being set back-to-back. From 1880 to 1980, a new temperature record was set on average every 13 years; however, for the period 1981–2018, the frequency of a new record has increased on average to once every three years.

The following table lists the global combined land and ocean annually-averaged temperature rank and anomaly for each of the 10 warmest years on record. 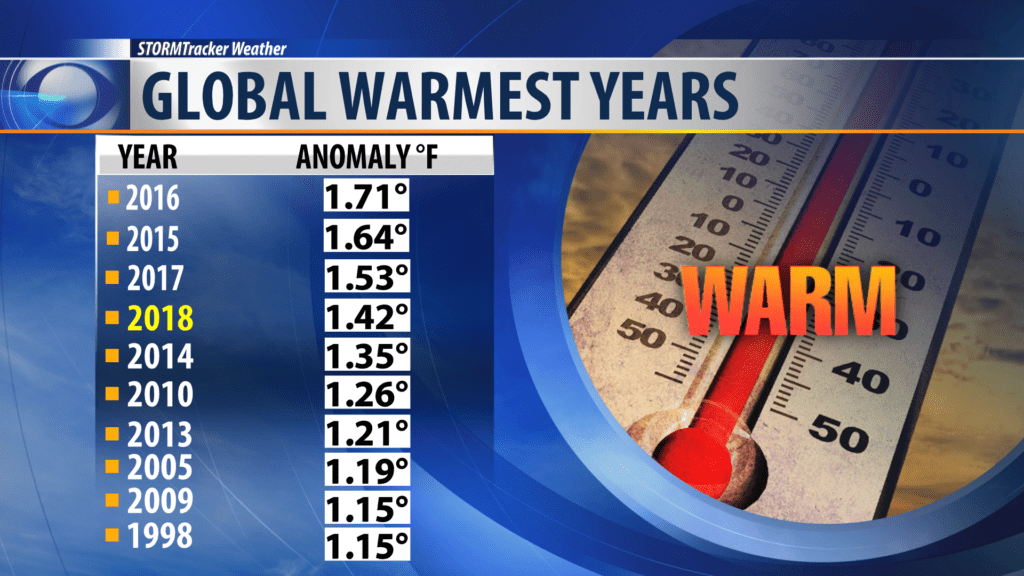