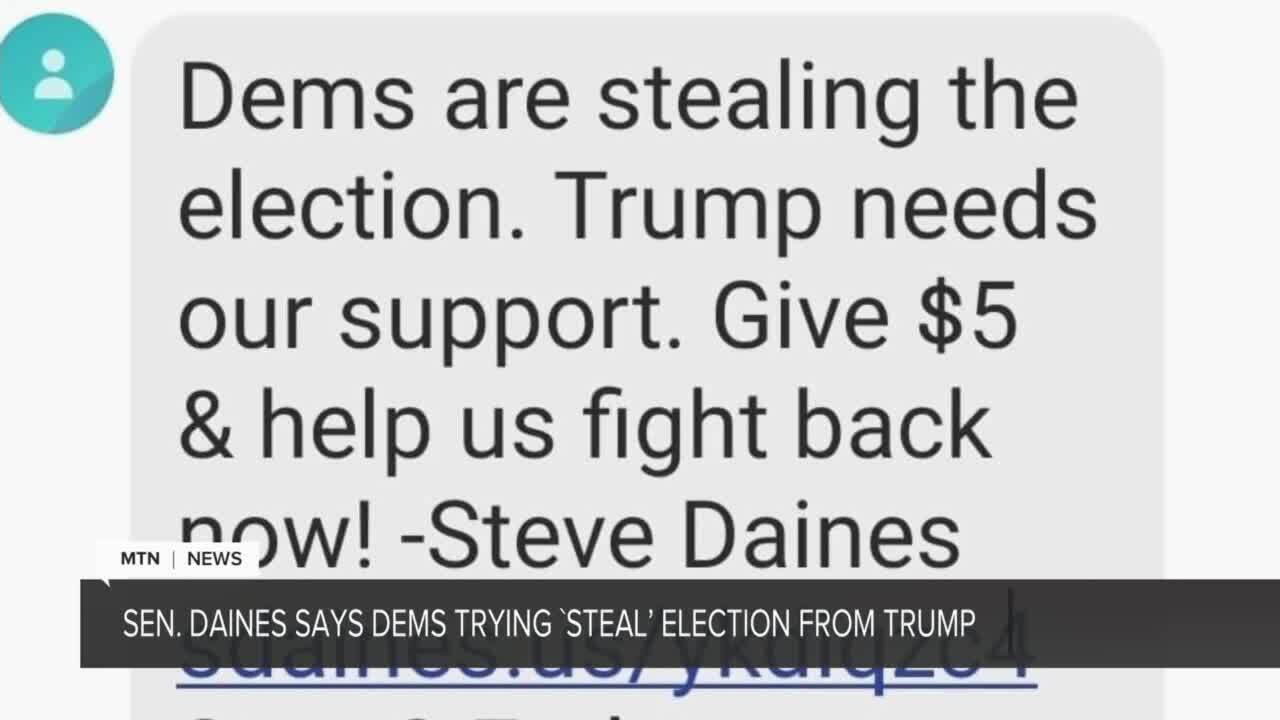 U.S. Sen. Steve Daines, re-elected on Tuesday, joined the ranks of Republicans this week supporting President Trump’s allegations that Democrats are “stealing” the election from the president – and is raising money to help Trump challenge the results.

In a text message Thursday evening, Daines said “Democrats are stealing the election. Trump needs our support. Give $5 & help us fight back now!”

Daines also has dispatched some of his 2020 campaign staff to Arizona, to help Republican efforts to “ensure transparency in the election there with ballots being counted,” his office told MTN News on Friday.

Counting of ballots is continuing in a half-dozen battleground states, where a winner in the presidential race has not officially been declared.

Biden leads, by narrow margins, in four of those states – Arizona, Nevada, Georgia, Pennsylvania – and will win the presidency if he wins Pennsylvania or a combination of the other states.

In Pennsylvania and Georgia, he inched into the lead Friday after hundreds of thousands of mailed and other ballots were counted after election day.

Election officials in those and other narrow-margin states have said the counting process is sound and that votes are being, or have been, legally counted, including many mailed ballots that arrived before election day. However, in at least one state – Georgia – a recount will occur, because of the closeness of the margin.

His office said any money raised by the message will help fund Trump’s efforts to recount or challenge the count in battleground states, where the outcome is close.

The Washington Post reported Friday that Trump’s sons and other allies are pressuring Republicans to echo the president’s claims of a “rigged” election – claims widely rejected by election officials.

Montana’s other U.S. senator, Democrat Jon Tester, said Friday that election officials across the nation have been “transparent in their tireless work” to count millions of ballots – and that Trump has made it clear he won’t accept the results unless they’re in his favor.

“This is both dangerous and undermines our democracy,” Tester said in a statement.

When asked how Democrats are “stealing” the election for Biden, Daines’ office said he believes that all legally cast ballots should be counted – and that reports of a “lack of transparency and oversight is alarming.”

It said the text message was meant to support Trump and fair elections – something that “Montanans very clearly do,” as witnessed by Tuesday’s election results in the state.

Trump carried Montana over Biden by 57 percent to 41 percent.

Daines’ office also sent a link to a news conference held by Republican National Committee Chairwoman Ronna McDaniel, who alleged that GOP poll-watchers had been intimidated in Michigan and that some “whistleblowers” had reported ballots being incorrectly dated, to make them valid.