BUTTE – Butte has been and still is a mining city. But it’s a city that also is digging deep into arts and culture.

“A lot of things that seem to be focused on the arts and it seems like an engine for the future of Butte,” said George Everett of Mainstreet Uptown Butte.

Though Butte has a rich history showcasing arts and entertainment, in recent years the city has been promoting arts and culture, especially in the Uptown. 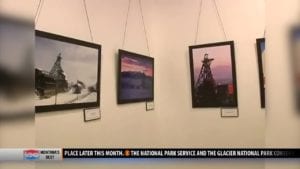 “That’s something that they look to, to help restore vitality for economic reasons, not just for the arts themselves, but the economic vitality that it draws to the community,” said Everett.

The Clark Chateau regularly brings in resident artists and writers to spend time in Butte and show its more than just an industry town.

“I think that it’s important to kind of shift the narrative and talk about the things Butte has to offer, which is a rich history and a rich arts and culture base,” said Christine Martin with the Root and the Bloom Collective, which brings artists to Butte.

“Part of the heartbeat of a community like Butte is the art and the culture that we see around us and I’m happy to see how I’ve been able to witness the advancement in the years I’ve been coming out here,” said writer and journalist Bill Lambrecht, who is this week’s resident artist.

Butte’s recent boom in art and culture has even inspired other artists to take up roots and move to Butte permanently. A reflection of the city’s growing vitality.

“It’s awesome, I love it here, I’ve found a great group of friends. I think that a vibrant cultural art scene breathes life into a place, it’s hope, you know,” said artist Shannon Driscoll, who recently moved to Butte.