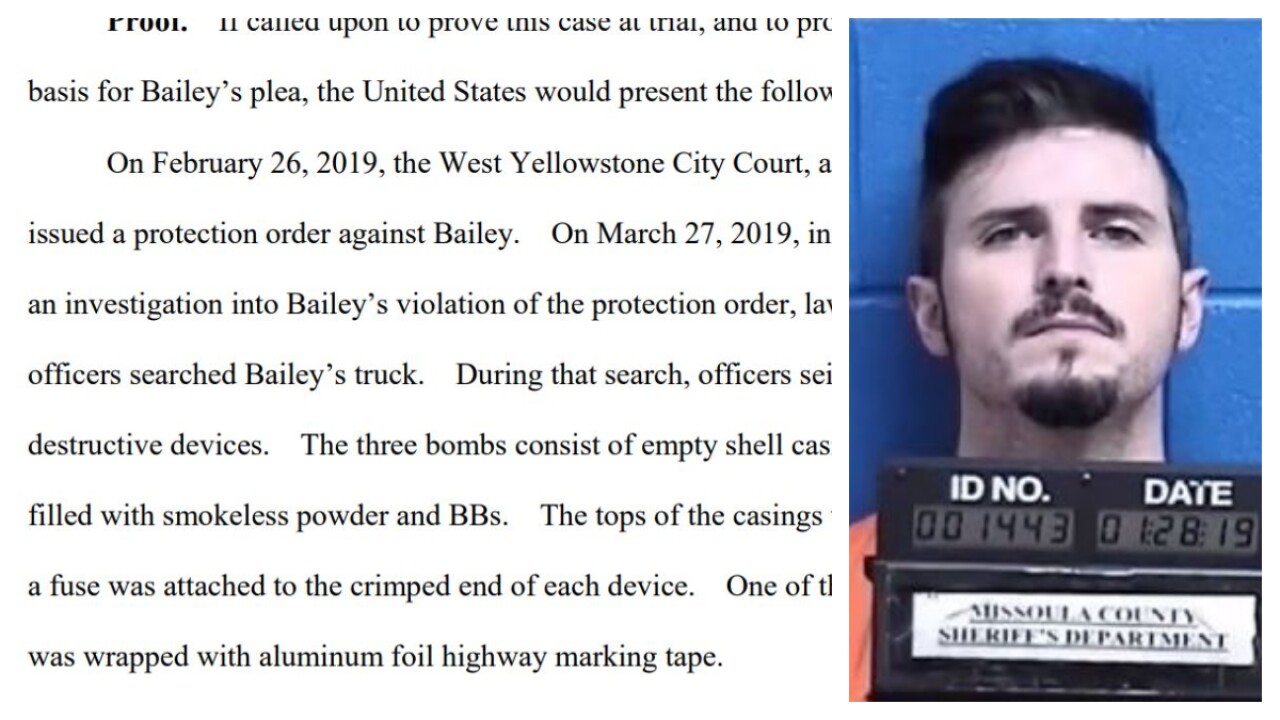 Bailey, 33 years old, pleaded guilty in federal court in Missoula to possession of unregistered explosive devices. Bailey faces up to 10 years in prison, a $250,000 fine, and three years of supervised release.

In court records filed in the case, the prosecution said evidence showed that on February 26, 2019, the West Yellowstone City Court issued a protection order against Bailey. On March 27, 2019, in connection with an investigation into Bailey’s violation of the protection order, law enforcement officers searched Bailey’s truck.

During the search, officers seized three small destructive devices, which were examined by an expert with the Bureau of Alcohol, Tobacco, Firearms and Explosives. The ATF expert concluded the three devices were designed as weapons and were properly identified as improvised explosive devices. Bailey did not register the devices with the National Firearms Registration and Transfer Record.

U.S. Magistrate Judge Kathleen DeSoto presided and recommended Bailey’s plea be accepted by Chief U.S. District Judge Dana Christensen, who is hearing the case. Sentencing is set for May 8.

(APRIL 1, 2019) Details remain scant, but the road closed in West Yellowstone on Thursday night during a federal investigation has been reopened, and what’s being called a felony stalking complaint remains under investigation.

According to a press release, teams from multiple agencies that responded to help with a federal investigation in West Yellowstone were released Friday after a suspect was arrested.

Charles Gibson Bailey, 32, of West Yellowstone, had an initial appearance on Friday in Missoula before U.S. Magistrate Jeremiah Lynch on a criminal complaint.

Bailey was charged with possession of a firearm by a person who is subject to a court order that restrains such person from harassing, stalking or threatening an intimate partner of such person. If convicted of the most serious crime, Bailey faces a maximum 10 years in prison, a $250,000 fine and three years of supervised release.

When Bailey was taken into custody, officers suspected violations under the jurisdiction of the Bureau of Alcohol, Tobacco, Firearms and Explosives (ATF) were present. The ATF was called in and additional steps had to be taken with suspected hazardous materials in a local residence.

During the course of the investigation, Firehole Avenue was closed between Geyser Street and Hayden Street to facilitate parking for the agencies’ vehicles. The street was reopened to the public on Friday morning. There continues to be no threat to public safety at this time.

The incident remains under investigation by the ATF.