A senior Federal Emergency Management Agency official is defending the agency after images surfaced showing what appear to be millions of water bottles sitting on a runway in Puerto Rico more than one year after Hurricane Maria devastated the island.

“Those are excess water bottles. Those were not needed during the response phase and were not distributed by the governor of Puerto Rico or FEMA for that reason,” FEMA deputy administrator Daniel Kaniewski told “CBS This Morning.”

Kaniewski confirmed he was comfortable with how FEMA handled the situation and said the agency will be putting out a statement on Thursday with an exact timeline.

“I’m confident that those that needed those bottles of water got them during the response phase and these were excess bottles of water that were, again, transferred to save money for the American taxpayer in January,” Kaniewski said.

His comments diverge significantly from what another senior FEMA official told CBS News’ David Begnaud on Wednesday. “If [FEMA] put that water on that runway, there will be hell to pay … If we did that, we’re going to fess up to it,” the official told him.

According to a new Washington Post Kaiser Family Foundation survey, 50 percent of Puerto Ricans say people in their households could not get enough water to drink in the year since Maria.

The General Services Administration in Puerto Rico (GSA) says it requested FEMA’s inventory of excess water through a federal program on April 17 and was given approval to use the supplies on April 26. In total, documents show the GSA claimed about 20,000 pallets of bottled water.

On Wednesday, the Puerto Rican government placed much of the blame for the abandoned bottles on FEMA. A statement from the Puerto Rico Federal Affairs Administration on Wednesday outlined what they saw as FEMA’s missteps in handling the water bottles. They said FEMA should have distributed the water to victims on the island, since they were in the agency’s possession. They also said the runway in Ceiba is federally managed land, and that FEMA should have deemed the water bottles “excess inventory” months before it did.

Puerto Rico’s governor last month raised the official death toll from Hurricane Maria from 64 to 2,975. President Trump questioned the numbers on Twitter Thursday morning, blaming Democrats who he said were trying “to make me look as bad as possible.” 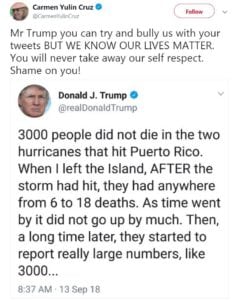