Meet Victoria, one of the most complete T. rex fossils in the world 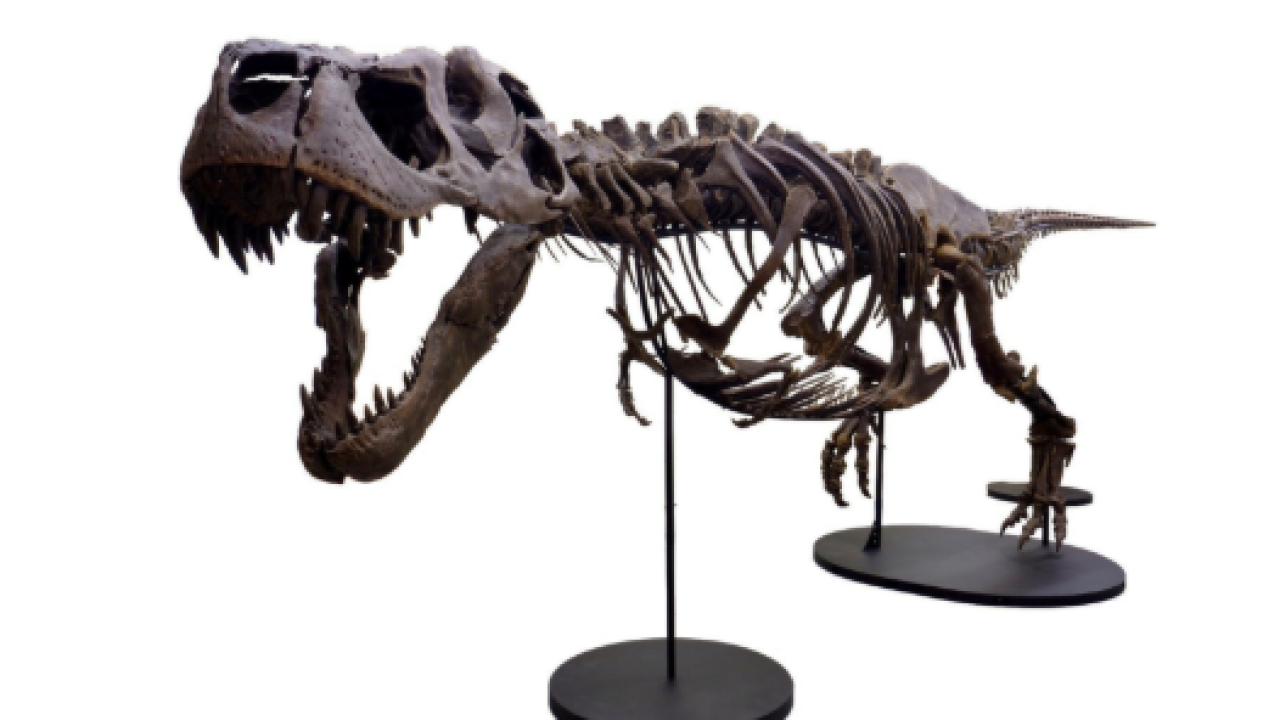 After she hatched 66 million years ago, Victoria was the queen predator of her time during the Cretaceous period. But the Tyrannosaurus rex was struck down in her prime, before reaching her 30s, by an unlikely culprit.

Now, the second most complete T. rex skeleton on record is about to embark on a global tour over the next five years, according to a new release.

Researchers discovered her fossilized remains outside Faith, South Dakota, in 2013. They worked meticulously over eight months to fully excavate her 199 bones. She was taken to a lab in Victoria, British Columbia, to be studied and restored, which is where she earned her name.

Victoria reached what the researchers call a "sub-adult" stage, living between 18 to 25 years, which meant that she still wasn't fully grown, although she was able to breed.

In life, she was 40 feet in length and reached 12 feet tall. As an adult, she likely would have stood at 14 feet.

Her incredibly well-preserved bones tell a unique story. Her fossil maintained a complete skull, including fragile palate bones that are rarely recovered in such good condition. The bones have a quality that is rarely seen and they're a deep, dark brown.

Researchers discovered an absorbed tooth in her jaw, which has only ever been seen in one other theropod, the group of dinosaurs T. rex belonged to.

They also found that two of her teeth grew out of the same bony socket, called an alveolus, which has never before been documented. There's evidence that her teeth were broken from crushing bones and growing back in to replace the ones she lost.

She also suffered severe neck trauma, evidenced by some fused vertebrae as a result of the healing process.

Victoria was severely bitten on the jaw by another T. rex and the mouth infection that followed encompassed both jaws, likely killing her before she could reach adulthood. This type of infection often leads to sepsis, the researchers said.

David Hone, a senior lecturer and director of the biology program at Queen Mary University of London, is like the investigator of a Cretaceous crime scene.

He's been studying the bite marks to understand what happened, how they lived and who was feeding on who.

The nature of Victoria's injuries are unusual. Although there are many past examples of tyrannosaur fossils showcasing stages of injury and healing, the location of Victoria's are right on the front of the lower jaw.

Hone said he's never seen a major injury in this location before. But it's clear that the attack came from another T. rex. There's only one creature with big teeth that could rip up the face of a T. rex, and that's another one.

"The discovery of Victoria has provided the paleontological community with a tremendous amount of new information. The various insights gleaned from her unique and groundbreaking pathologies will be the subject of research for years to come," said Heinrich Mallison, Victoria's lead paleontologist and researcher at the Center of Natural History, Hamburg University. "From a bite on her jaw that led to an unusually widespread infection to an absorbed tooth in the maxilla, it is clear she overcame many rivalries and injuries in the struggle to survive as an apex predator."

Researchers are continuing to study Victoria and multiple papers, including findings about the fossil, will publish in the future. And to ensure that Victoria is accessible, 3D scans of her bones will be provided to researchers interested in studying her.

Victoria's first stop on tour is at the Arizona Science Center in Phoenix, which opens on November 17 and runs through May 25, 2020. After that, she'll continue on an international tour of museums.

In addition to her complete skeleton, visitors to the exhibit will be able to hear what she might have sounded like, see simulations of her as a predator, protector and mother and learn more about her recovery process.

"The T. rex is the most iconic dinosaur known to man and the focal point of countless books, TV showsand films. The discovery of Victoria is truly remarkable and really changes our understanding of the species," said John Norman, managing director of exhibitions at IMG, which created the exhibit. "Through Victoria the T. rex,we're providing visitors with an in-depth look at the life of the Tyrannosaurus rex and expanding upon existing knowledge."