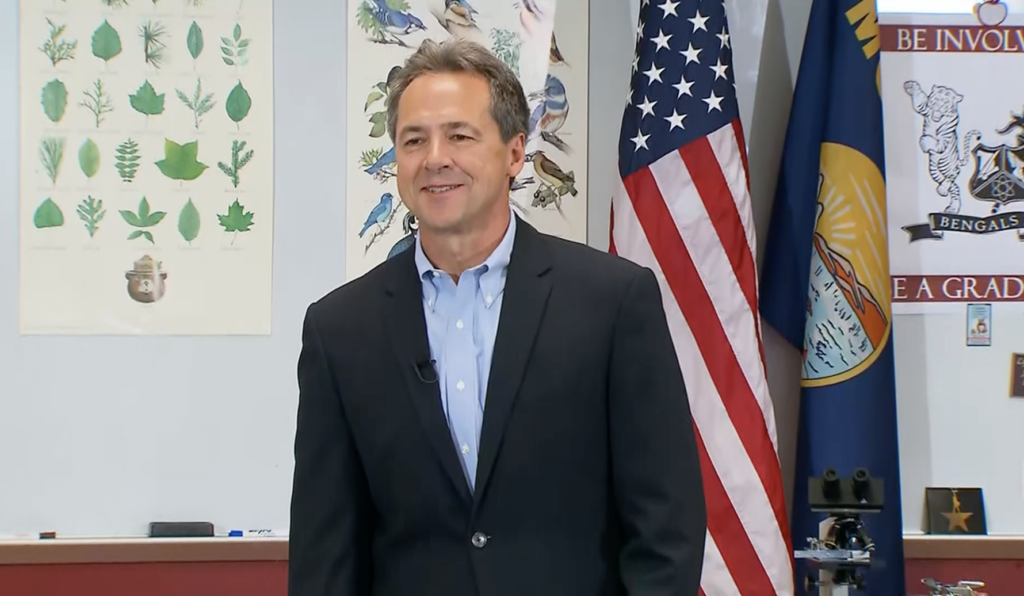 HELENA — Gov. Steve Bullock on Tuesday became the 22nd Democrat to throw his hat in the presidential ring for 2020, holding a series of campaign-launch events here with supporters, high school students and the media — and then preparing for his first official campaign swing through Iowa later this week.

“This isn’t for me a vanity project,” he told Montana reporters Tuesday morning. “I wouldn’t be getting into it if I didn’t think I had something really significant to offer.”

Bullock, 53, a two-term governor, said he’s the only Democratic candidate who’s won election in a state won by President Donald Trump in 2016, and pointed to his record of getting major initiatives, like Medicaid expansion, through a Republican legislature in a rural state.

“I’m the only one who’s bridged some of the (political) divides and made government work,” he said.

But the main focus of his message is on what he called the “corrupting influence” of money in politics — and his battles to crack down on that money and a plan to do so nationally.

“That’s why we need to defeat Donald Trump in 2020 and defeat the corrupt system that lets campaign money drown out the people’s voice, so we can finally make good on the promise of a fair shot for everyone,” he said in his campaign launch video, which was released at 4 a.m. Montana time.

Bullock, however, has a steep hill to climb to become relevant in the presidential race, which already has 21 other Democrats, including the likes of national figures like former Vice President Joe Biden and U.S. Sen. Bernie Sanders of Vermont.

He’s pinning most of his hopes on Iowa, the site of the first presidential nominating caucus next February.

Bullock will be in Des Moines, Iowa, on Thursday to meet with voters and then plans seven other events in eastern Iowa through Saturday.

He also must attempt to crack the lineup for the first Democratic primary debate, scheduled for June 26-27 in Miami. The website Politico reported Tuesday that Bullock already had met the criteria to be one of the debate’s participants, but the final word comes from the Democratic National Committee.

Politico also reported extensively Tuesday on Democrats who are disappointed that Bullock is opting for a long-shot presidential run, rather than challenging Republican U.S. Sen. Steve Daines in 2020. Bullock has said repeatedly he’s not interested in running for the Senate.

Bullock has been prepping for some time for the presidential run, assembling a team that includes some seasoned political pros. His Big Sky Values political action committee, formed in mid-2017, had raised almost $1.8 million through March.

On Tuesday, he also visited his daughter Caroline’s Helena High School classroom, where he spoke to students — and a phalanx of national network TV cameras and reporters.

“This morning, we released a video announcing that I was running for president of the United States in 2020,” he told the students. “Pretty audacious goal for a B student who sat in these same seats that you actually sat, are sitting in, right now.”

Bullock grew up in Helena and attended college in Claremont, California, and went to law school at Columbia University in New York City. He became attorney general in 2009 and successfully ran for governor in 2012 and 2016. Term limits bar him from running for a third term.

Bullock’s video launch noted that he won re-election in a state where Trump won by 20 percentage points in 2016, and that he worked across the political aisle to “fight dark money (in campaigns) and pass one of the strongest campaign-finance laws in the country.”

The launch video opened with a shot of the Berkeley Pit in Butte and referenced Montana’s “copper kings,” notorious for their efforts to control state politics through bribery and other financial means in the late 1800s and early 1900s.

It then mentioned Bullock’s opposition to Citizens United, the 2010 U.S. Supreme Court decision that removed limits on corporate spending on elections, and his efforts to pass Montana’s 2015 law that works to disclose all spending on state campaigns.

Bullock said Tuesday that as president, he would issue executive orders requiring every company doing business with the federal government to disclose the money they spend to influence elections — or not get the contract — and requiring federal agencies to enforce more rigorous reporting standards for groups spending money on elections.

He also said he wants to start the effort to repeal Citizens United.

“This won’t be easy,” his campaign said, “but Gov. Bullock has done it before, and won.”

In a poll released last week by Morning Consult, a national on-line polling firm, Bullock and nine other Democratic candidates each had support from 1 percent of the voters. Among likely Democratic primary voters, he was ranked 10th — still at 1 percent.

His campaign advisers include Nick Baldick, who worked on Al Gore’s 2000 presidential campaign and John Edwards’ 2004 campaign, and Jennifer Palmieri, former Obama communications, according to The Hill, a D.C. publication.

Bullock has hired several other Democratic campaign veterans and has staff on the ground in Iowa, site of the nation’s first presidential nominating caucus next February.