HELENA — Gov. Steve Bullock on Tuesday morning became the 22nd Democrat to throw his hat in the presidential ring for 2020, using a video launch to declare that he’s running to “take our democracy back” from a corrupt, monied system rigged against the average person.

“That’s why we need to defeat Donald Trump in 2020 and defeat the corrupt system that lets campaign money drown out the people’s voice, so we can finally make good on the promise of a fair shot for everyone,” he said in the 2-minute, 44-second video released at 4 a.m. Mountain time.

Bullock’s announcement Tuesday didn’t come as a big surprise. He’s been testing the waters for several months and, in the past several weeks, had added advisers and staff with experience on Democratic presidential campaigns and other high-profile campaigns.

Bullock planned to meet with reporters later Tuesday morning and had an afternoon event planned at Helena High School, where he’ll be talking to students in a classroom.

Bullock, 53, cannot run for re-election for governor next year because of term limits. Some Democratic leaders had been pressing Bullock to challenge Republican U.S. Sen. Steve Daines next year, but the two-term governor has said he’s not interested in the Senate contest.

Bullock’s video launch noted that he won re-election in a state that supported Trump by 20 percentage points in 2016, and that he worked across the political aisle to “fight dark money (in campaigns) and pass one of the strongest campaign-finance laws in the country.”

The video opened with a shot of the Berkeley Pit in Butte and referenced Montana’s “copper kings,” notorious for their efforts to control state politics through bribery and other financial means in the late 1800s and early 1900s.

It then mentioned Bullock’s opposition to Citizens United, the 2010 U.S. Supreme Court decision that removed limits on corporate spending on elections, and his efforts to pass Montana’s 2015 law that works to disclose all spending on state campaigns.

Bullock, however, has a steep hill to climb to become relevant in the Democratic presidential nominating race.

In a poll released last week by Morning Consult, a national on-line polling firm, Bullock and nine other Democratic candidates each had support from 1 percent of the voters. Among likely Democratic primary voters, he was ranked 10th — still at 1 percent. 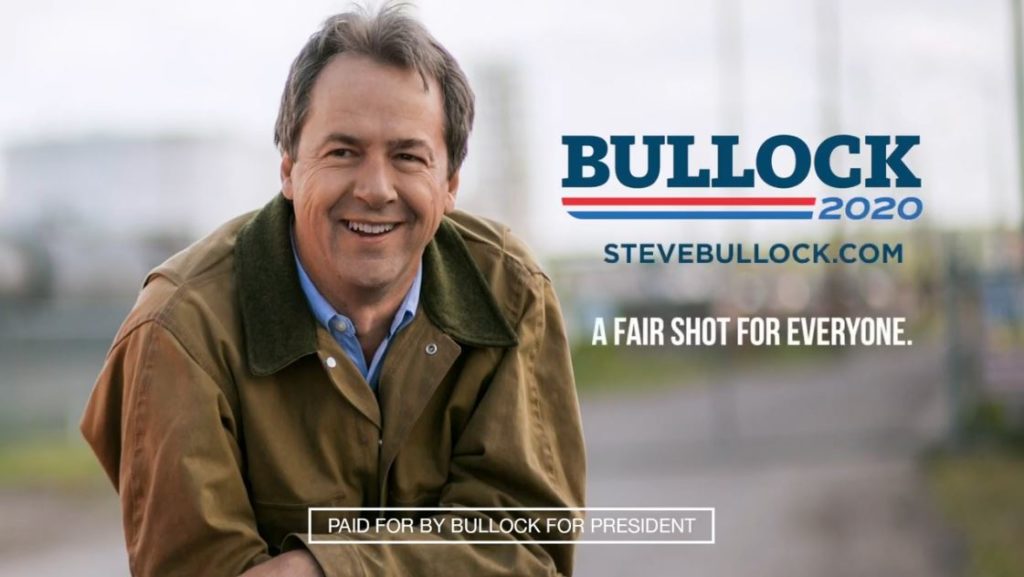 He’s also starting fairly late in the campaign season, following 21 other candidates into the race.

Yet, as reported Monday by The Hill, a Washington, D.C., publication, Bullock has brought some experienced hands on board his campaign.

Nick Baldick, who worked on Al Gore’s 2000 presidential campaign and John Edwards’ 2004 campaign, is a national senior adviser to the Bullock campaign, the Hill reported. The publication also said that former Obama communications director Jennifer Palmieri is an informal adviser.

Bullock has hired several other Democratic campaign veterans and has staff on the ground in Iowa, site of the nation’s first presidential nominating caucus next February.

RELATED: Here are the 22 Democrats who have said they’re running for president