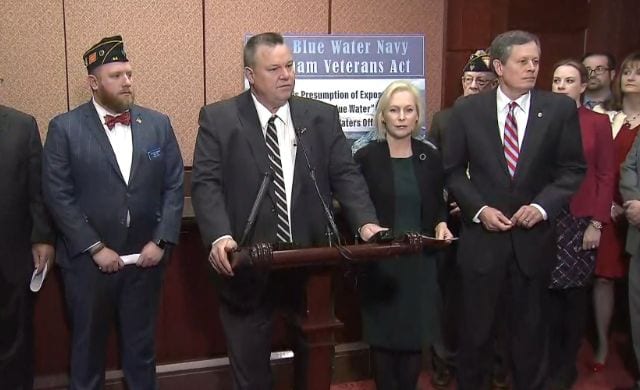 HELENA – Montana’s two U.S. senators on Tuesday urged the passage of a bill, blocked in the Senate, to mandate health and disability benefits for a group of Vietnam War veterans exposed to the herbicide Agent Orange.

“The bottom line is, this is an opportunity to fix something that the bureaucracy has screwed up a long time ago, and every day we wait, there is one less Vietnam veteran,” Tester said. “So now is the time to do it.”

The bill to mandate benefits for Vietnam vets who served on Navy ships off the coast of Vietnam passed the House unanimously but has been blocked in the Senate by Sen. Mike Enzi, R-Wyoming.

Daines said the U.S. Department of Veterans Affairs improperly ruled years ago that Vietnam veterans who served on ships offshore in Vietnam are not eligible for benefits related to health problems caused by Agent Orange.

Gillibrand said the bill needs to be passed now, because if it’s not, veterans would have to wait for many more months for the next Congress to act.

“We don’t have that time, because members of our Armed Services are dying now,” she said. “Our veterans are dying now. And they aren’t getting the health care that they need, that can preserve their lives, protect their lives.”

Representatives of veterans’ groups also appeared at the news conference to urge passage of the bill.

Congress passed a law in the early 1990s to grant VA health benefits to veterans exposed to Agent Orange, which contained toxic chemicals.

In 2002, the VA interpreted the law to say Navy veterans who served off the coast of Vietnam are not eligible for the care.

Daines and Tester said Congress intended to cover all veterans exposed to Agent Orange, and that studies have shown that some serving on Navy vessels offshore were exposed to the herbicide when it was sprayed on Vietnam.

“When we send folks off to war, and we do it with some regularity, they do it, and they do their jobs and they come back, and they’re exposed to things,” Tester said. “If we’re not willing to take care of our veterans when they get back home, we should not send them into places in this world where they might be exposed to toxins, or get shot.”