MAMMOTH HOT SPRINGS, WY – A bridge located south of the Lewis Lake Campground on the South Entrance Road will be replaced over the next couple years, according to park officials. 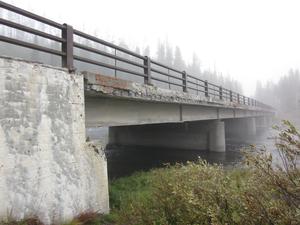 The park considered two alternatives in its EA. Alternative B, the approved action, will shift the South Entrance Road several hundred feet to line up with the new bridge. Traffic will continue on the existing bridge while the new bridge is under construction. Alternative B was selected to ensure excellent bridge structural integrity into the future, improve pedestrian safety, and reduce localized vehicle congestion.

Depending upon funding, roadwork could begin as early as spring 2020 and last for two consecutive years followed by the spring of a third year. When the proposed project is implemented, construction delays would normally be limited to 30 minutes. There may be up to six temporary road closures of up to six hours each to set bridge girders. The Lewis River Falls Overlook Trail and parking areas would be closed during construction.