STEVENSVILLE – There are still so many questions about what happened that night in March when a suspect shot three people near Expressway in Missoula and later, a Montana Highway Patrol trooper near Evaro.

We won’t know the details — or the ‘why — until this case goes to court. But the story we can tell is how one of the survivors is doing — four months after enduring those devastating injuries.

MTN’s Jill Valley sat down with 28-year-old Casey Blanchard for a story of healing — and hope.

Casey Blanchard gets better at maneuvering his wheelchair around his Stevensville home and each day, he gets a little bit stronger.  And that is a miracle.

Last March, a gunman shot him eight times with the bullets shattering bone and organs — damage that’s left him unable to walk. He’s had 11 surgeries with more to come to remove shrapnel.

Jill Valley: As the bullets were hitting you were you aware that’s what was happening? Did It hurt?

Casey Blanchard: “Yea. It was. It felt like taking 1,000 wasps and getting it in the face or stung a million times”

Casey can’t discuss certain things about that night because the case is still under investigation. But he remembers the moments after he was shot, waiting for help.

“I more or less was thinking about the kids and life and staring at the stars. That’s it  — until the paramedics picked me up. And I didn’t know nothing. Literally, I don’t remember much for three weeks after that,” Casey said.

He was rushed to Saint Patrick Hospital and later flown to Salt Lake City.  When his wife, Leah, saw her neighbors — the Palmer’s — in the same hospital, it was confusing until she realized Casey and Wade were both injured that same night.

But It would be weeks before Casey knew the full extent of what happened that night. “I didn’t really know what was going on. I thought I was in a big dream and I told myself to wake up,”  Casey recalled.

“We had to tell every doctor and nurse on shift not to say anything because they didn’t want him to decline,” Leah said. “Finally, he started asking questions. ‘Where are the other two?’ ‘What happened?’ ‘Where’s my mom?’ And the nurses were kind of the ones that said I think it’s time you tell him, he’s asking a lot of questions, he’s awake.” 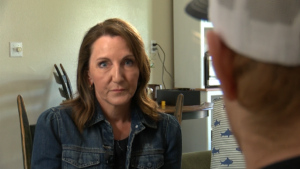 As the months passed, Casey got stronger and in June came home to be with his young sons and to start a new life of healing and rehab.

His wife, Leah is quick with a smile and a laugh. She already worked as a home health aide, so she was prepared for her new role.

“I have always been a caregiver. This has just been natural for me. I don’t want to say it’s natural because what happened was super sad, but it has been amazing, Leah said. “Because I am a caregiver, I love taking care of people I take care of my kids, so I didn’t think it was abnormal. He’s my husband and I love him so much. I’ll take care of him forever.”

She also knows her family is supported by the love of her community who have been there since the start. “They haven’t given up on us either. Just the support has really helped us level out and get comfortable with being home”

Casey hopes to be back at work at Gomer’s Diesel Service and Repair — and they’re getting an office ready for his return.

This Fall this family of four becomes a family of five with a new baby boy arriving in October. Time will tell the extent of Casey’s paralysis but no matter what, he’s ready for his future.

Casey Blacnhard: “I see like alot of people that are in wheelchairs, it’s half and half. A lot of people get in a slump and don’t progress with really sucks but the other half of people they can roll down the road.  I mean, rather than running, you’re rolling. “It’s no big deal.”

Jill Valley: “Are you going to be a roller?”

Casey Blanchard: “Yea. For a while if not for life. It doesn’t bother me.”

Casey just got a new adaptive truck so he can drive and he and Leah hope to buy a new house that can better accommodate his wheelchair.

Casey’s mother Julie passed away in June. A celebration of life is scheduled for later this month.

Trooper Palmer is continuing his recovery in Missoula after he suffered gunshot wounds to the head and neck.

The suspect in the case remains behind bars.

A GoFundMe account has been set up to help Casey Blanchard.