GREAT FALLS – Among the pictures of family in Chief Master Sergeant Eryn McElroy’s office at Malmstrom Air Force Base is a copy of the Dr. Seuss classic ‘Oh the Places You’ll Go.’

“There’s so many correlations to military life,” said McElroy. “Making new friends, starting over, being adventurous and being willing to try new things.” 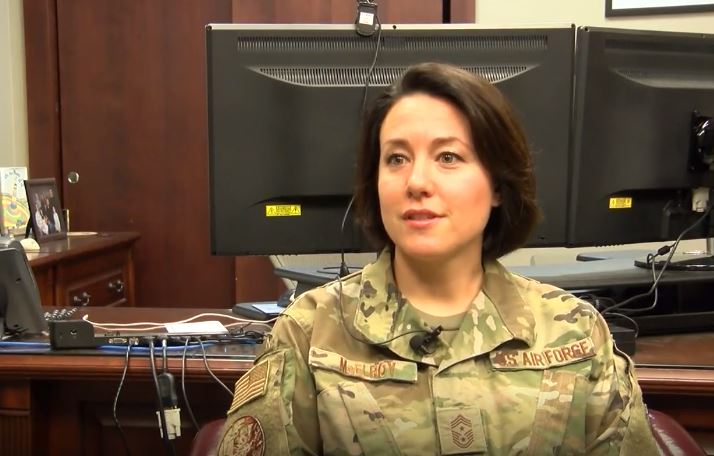 Her Air Force journey has spanned more than two decades over seven bases. Now she’s living a dream of serving in the place she loves.

“My family and I have been literally speed dating Montana since we arrived,” said McElroy. “We’re trying to get all the fun activities in and just see all the things that I truly love about Montana.”

A graduate of C.M. Russell High School in Great Falls, she’s risen to Command Chief at Malmstrom. She’s the senior enlisted advisor to base commander, Colonel Jennifer Reeves. She chose the Air Force because growing up in Great Falls, she knew people on the base.

While she doesn’t come from a military background, she married into one. She met her husband Scott while the two were serving in California. He’s since retired from the Air Force, but not from supporting what they call ‘Team McElroy.’

“It’s not really the stereotypical set that the man is serving and the wife has to move around,” said McElroy. “He’s had to make those sacrifices for my career, so he’s the best.”

Scott serves as the 341st Missile Wing key spouse, helping new families adjust to life on the base.

McElroy is proud of her extensive background in mental health. She said the Air Force is really like a family, and it’s important to have each other’s back.

“A lot of times they’re not going to be stationed places that they’re close to their families or maybe people they would share some of that stuff with,” said McElroy. “So we really need to be sensors to keep and take care of one another. And it’s ok to take a knee sometimes and take a little break. Maybe you can’t do your primary duties for a little while because you’re working through some stuff and that’s ok.”

Affectionately referred to as ‘Chief Mack’, she also knows Malmstrom’s nuclear mission can be stressful for young airmen.

“There’s also a sense of pride that goes along with doing a mission that’s so sensitive, is so critical, and so although stressful, it’s also kind of a badge of honor to be able to do this awesomely, devastatingly important mission here,” said McElroy.

McElroy knows her time at Malmstrom won’t last forever and expects another assignment elsewhere, but she’ll always deeply cherish her service in her hometown.

“Oh yeah, there’s nothing like being home,” said McElroy.

By Tim McGonigal – MTN News
Copyright 2022 Scripps Media, Inc. All rights reserved. This material may not be published, broadcast, rewritten, or redistributed.