Is the end of an era for Colstrip here?

COLSTRIP – One has to wonder if the final chapter in the history of the Colstrip Power Plants is being written right before our very eyes.

When construction of the first two plants got underway in the mid-1970s, it ushered in a new era for Montana’s energy sector. 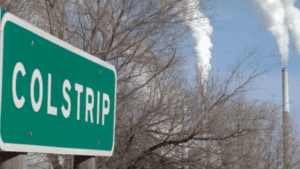 Now, with Tuesday’s announcement that co-owner Talen Energy is shutting down the plant’s two oldest units, that era may be coming to an end.

The debate ensued: Who would end up paying for the costly plants, whose price tag had ballooned from $500 million to $1.2 billion?

Montana Power Company President Paul Schmechel sounded a familiar refrain – zeroing in on the affordability and dependability of coal.

“You need electrical power when you need it.  We can’t issue a raincheck and invite you back to pick up some kilowatt hours next week,” Schmechel said at the time.

Four decades later,  that very same argument was front and center during this year’s 2019 legislative session – as lawmakers considered the so-called “Save Colstrip” bill.  It would have allowed Northwestern Energy to purchase the plants for a single dollar.

Again, affordable, dependable power was Colstrip’s calling card, but in the end, the votes weren’t there, and the bill failed.

Billings Sen. Tom Richmond, who sponsored the bill, said Tuesday the closure announcement wasn’t a surprise, but he said, “there’s a big difference between anticipation and reality.”

Colstrip Sen. Duane Ankney said he shares the anger and disappointment over the closure announcement.

While vowing to keep up the fight for the plant’s future, he says his first concern is for the people who live and work in Colstrip.

“Our plant is our heart, and I will do anything and everything in my power to ensure it continues to beat strong,” Ankney said in a statement.

Keep in mind – Colstrip 1 and 2 provide much of the un-interruptable power so important to the state’s largest industrial customers, such as the three oil refineries and the medical corridor here in Billings.

Richmond says time will tell, if the electrical grid can absorb the loss of the two oldest Colstrip plants. That transition is what he says he’ll be focused on moving forward.