Chippewa Cree Tribe fighting hard to save their language

A language believed to have begun as a dialect of another language spoken thousands of years ago is now known and spoken by fewer and fewer people.

Elders and community members of the Rocky Boy’s Reservation are fighting to make sure their language, Cree, which belongs to the Chippewa Cree Tribe, does not die.

Stone Child College in Box Elder holds events every month in their library that incorporate Cree.

May’s event was Cree coloring where objects were drawn on a page with the Cree pronunciation as well as symbols at the bottom.

Amanda Bullchild, who regularly attends the language events with her children, said, “A lot of people already don’t understand it, don’t know it, and the few that do try to keep it going, they try really hard to get others involved.” 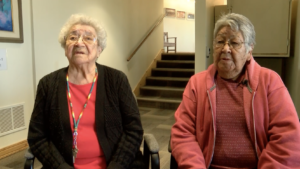 Helen Parker is known as ‘Elder on Campus.’ When students or teachers want to know things about their culture, they’ll ask her. Ethel Parker is also very wise in their culture and the pair works together.

Ethel said, “We are adamant at keeping our language alive. We’ve been working on language since the 1970s, so you can see how old we are.”

She added she wants to see kids speaking Cree like when she first started school.

“I grew up speaking both English and Cree,” Ethel said. “So, I’ve always known how to speak Cree. It’s just so much fun to be able to think in English and in Cree.”

Helen said she did not even know how to speak English when she first attended school because her family only spoke in Cree.

She said, “I think the only English word I knew and I don’t know where I learned it, I heard it, ‘thank you.’ So, I’d go around saying thank you, thank you. I was so proud that I could say thank you in English.”

They say it’s important everybody learns to read and write in Cree because there are not many left who can.

Stone Child College Library staff, Joy Bridwell and Samantha Courchane, set up the events in the library each month.

In the Cree language, it’s about the symbols and the history behind them.

Ethel said, “We have our way of writing, we use symbols instead of English letters. Our writing consists of symbols.”

“It keeps our language going, I mean it teaches our children how to understand and speak our own language instead of speaking English,” said Amanda. “I don’t speak very much but I do understand a little bit and I do try to teach my kids so they can understand, so I can try to keep it going.”

The next event at Stone Child College will be on June 26 from 5-8 p.m.

For more information, you can visit the Stone Child College Library website.