Many Guns was last seen Thursday, February 21 and his family told MTN News he left in the middle of the night and never returned home.

A statewide Missing/Endangered Person Advisory for him was issued Monday morning. The Department of Justice canceled the MEPA at 2 p.m. Monday.

No details have been released concerning the cause of death.

UPDATE: 2/25/19, 2:05 P.M. – Wanye Many Guns has been found, and the Missing Endangered Person Advisory for him has been canceled, according to a media release.

UPDATE: 2/25/19, 9:30 A.M. – A statewide Missing Endangered Person Advisory has been issued for Wayne Many Guns, a 22-year-old American Indian male, 6 foot 2 inches tall, 140 pounds, brown hair, brown eyes, last seen wearing a green sweater and blue jeans. Wayne was last seen on February 21st, and he may be attempting to travel from Browning to Lame Deer. He has no vehicle and his judgment may be impaired, he could possibly be exposed to harsh winter conditions.

If you have any information, please contact Blackfeet Tribal Police at 406 338-4000.

Wayne Roy Many Guns, 23, was last seen on Thursday, February 21.

A statewide Missing Endangered Person Advisory was issued for Many Guns on Monday morning. The advisory states that Many Guns may be attempting to travel from Browning to Lame Deer.

“He has no vehicle and his judgment may be impaired, he could possibly be exposed to harsh winter conditions,” the advisory added.

His family told MTN he left in the middle of the night and never returned home. “Nobody’s seen him since, nobody has called,” LaShinta Many Guns, Wayne’s sister, said. 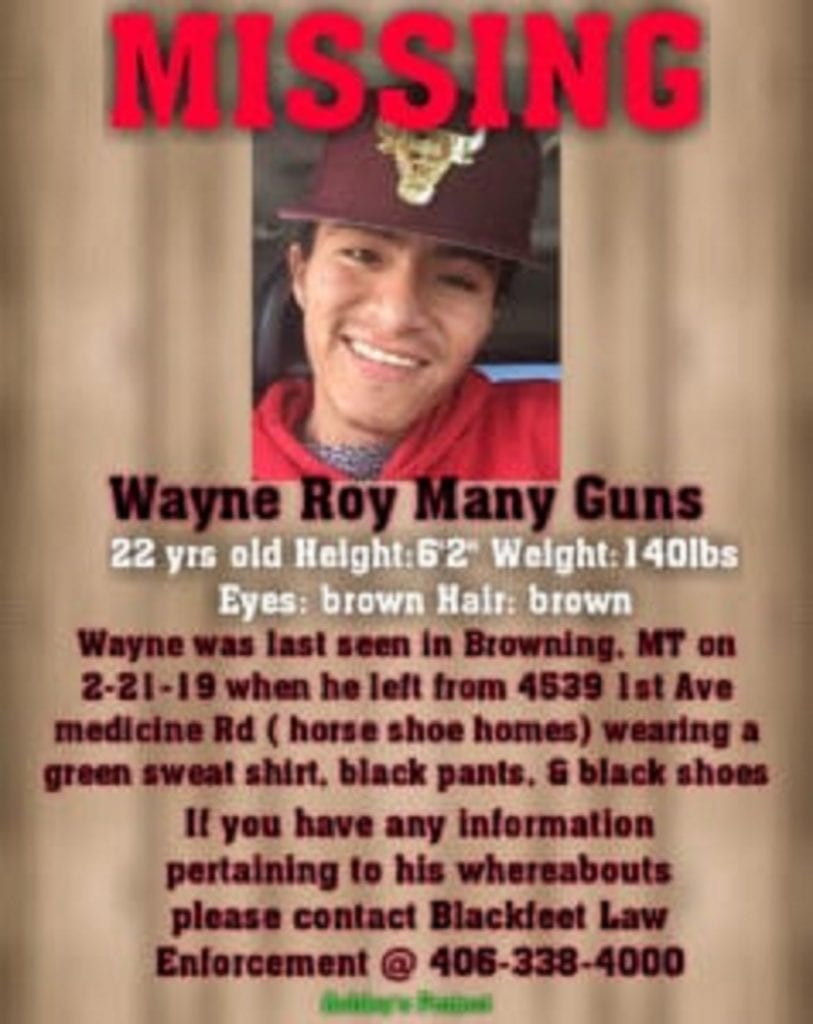 Many Guns is 6 feet tall with a slender build and weighs about 140 pounds. He has brown eyes and short brown hair and was last seen wearing a green sweater and blue jeans.

LaShinta said she is worried about the winter weather while her brother could be out there.

“It’s really, really cold, and it’s been three to four days since I’ve had contact with him,” LasShinta said. “It’s very unusual because he calls me all the time.”

She said Many Guns is enrolled at the Blackfeet Community College and was recently accepted into Montana State University.

The family plans to organize a search party in the coming days.

“He’s very nice, smart, educated boy. It’s not like him to disappear like this or not call or come by. It’s really strange,” LaShinta said.

Anyone with information about Many Guns’ whereabouts is asked to contact Blackfeet Law Enforcement Services at (406)-338-4000.