It’s been about three-and-a-half months since Lewis & Clark Public Health launched its Man Therapy campaign and we’re getting a first look at how it’s doing so far. 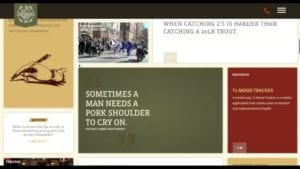 The campaign looks to cut through the stigma associated with mental health issues like depression and suicide and get people connected with resources they might need.

Those involved with the Man Therapy program say since the website launched, there have been 924 new users.

Of those, 199 people utilized the mental health screener.  And 25 people used the Red Phone option, which gives them access to the suicide prevention lifeline online chat and the phone number for the lifeline.

Suicide Prevention Advocate Jess Hegstrom says they are pleased to see people are accessing the website.

“We’re excited and we just want to do more to keep the spark going, the momentum and just really make sure that this program is well recognized wtihin the community,” says Hegstrom.  “So, for example, what I would like to see is if you’re aware of man therapy tell a friend about it and if you see something online or on Facebook, share it – just let people know about the program.”

Those events will continue into the new year.  You can find more information on the events and the screening tool here:  mantherapy.org