HELENA, Mont. – Crewmembers of the under-construction submarine USS Montana are touring the Big Sky state this week to inform the public about the new warship.

On Friday, during a luncheon at the Montana Club, Commander Michael Delaney and Electronics Technician Second Class Evan Glenn spoke about the ship’s capabilities and fielded questions from Montana citizens. 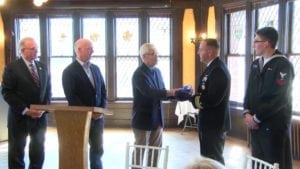 Once completed, the USS Montana will be a Virginia class nuclear attack submarine.

The submarine will measure 377 feet in length and 34 feet wide and be capable of exceeding 25 knots, reaching depths greater than 800 feet.

Delany, commanding officer of the boat, said the submarine is expected to be the most advanced warship of her kind once completed.

“’Vigilantes of the Deep’ is what we call ourselves,” said Delany, “Basically the first hint that other ships will get of us when we’re close by will be us firing a missile. That’s how quiet we’ll be.”

Delaney said this is his first time in Montana but he’s has been inspired by what he’s seen: “I’ve been taken back by the beauty of the state and the hospitality, warmth and patriotism I’ve observed, and the support the boat gets.”

About half the crew of the USS Montana have been selected and two are from Montana, including ET2 Glenn.

Glenn, a Bozeman native, said he’s honored to represent his home state on the vessel while serving his country.

“It feels great,” said Glenn, “I have a lot of pride and joy in it, and like the captain was saying, this is the first boat that’s been named the USS Montana in 110 years. It’s a great honor to be able to serve aboard this warship.”