GLASGOW, Mont. – A professional photographer in Glasgow has filed a lawsuit against Netflix, saying the streaming service used one of his copyrighted photos in a series called “Beyond Stranger Things” without permission. 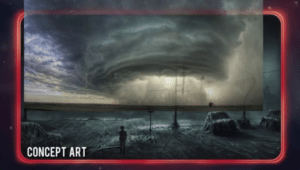 Sean Heavey took the photo – titled “The Mothership” – in Glasgow in July of 2010. The photo shows a supercell thunderstorm and has been featured in publications such as Discovery, The New York Post, USA Today, National Geographic, and more.

The lawsuit was filed on September 13 in District Court in Great Falls.

Heavey told MTN News in May that the Netflix series “Beyond Stranger Things” – in Volume 1, Episode 3 – used his photo to create a concept art piece.

“It’s really annoying and frustrating. I mean, I spend thousands of dollars a year on gas to drive thousands of miles,” said Heavey. “I spent years learning the craft of photography and spent lots of money on equipment gears in order to take pictures.”