MISSOULA, Mont. – Watching a movie on 35mm film might seem like a step into the past, but for many, 35mm film offers a different viewing experience.

Now you can decide for yourself at Missoula’s Roxy Theater, the only movie theater in Montana currently running 35mm projectors. 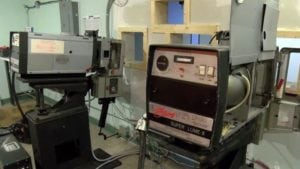 The ability to show movies in 35mm allows the Roxy to play movies that they haven’t been able to show in the past. The 2017 film “Dunkirk,” for example, could have been played in 35mm if the theater had the option at the time.

Now, the Roxy plans to screen one or more 35mm prints each month, the first of which will be the 1952 film on smokejumpers, “Red Skies of Montana” on Sept. 30.

Besides opening up the movie uncatalogued to the Roxy, 35mm film offers a movie experience that some say is richer and more nostalgic feeling that digital can’t offer.

“Someone around here has compared it to collecting records vs. listening to MP3s you know it’s got that warmth and that analog quality that you can’t quite put your finger on,” said Roxy executive director Mike Steinberg. “There’s probably people that are far more articulate than I am. Lots of people, more articulate than I who can really name what that is. But there is certainly something, it’s something that we believe in as fans of movies.”

35mm film is separated into two reels, which requires two projectors per film. When the first reel ends the second projector starts showing the second reel to finish the movie.