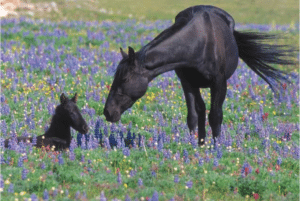 BILLINGS- A federal judge has delayed the start of this weekend’s gather of 17 wild horses by the Bureau of Land Management in the Pryor mountains in Montana and Wyoming.

In a Friday ruling, U.S. District Court Judge Susan Watters sided with plaintiffs Gingers Kathrens and the Cloud Foundation in placing a 14-day halt on the roundup, which the BLM has conducted at the Pryor Mountain Horse Range three times since 2009.

Watters wrote that the BLM failed to prove that the roundup would not result in the “permanent loss of genetic diversity of the Pryor Herd.”

The horses in the 38,000-acre range are believed to be descended from horses transported to the United States by Spanish conquistadors in the 1500s and Crow tribal horses.

Watters scheduled another hearing for 9:30 a.m. Sept. 28 to rule on a preliminary injunction to stop the roundup entirely.

This spring, the BLM estimated the Pryor mustang population at 154, according to court documents. The BLM gathers the horses to prevent overgrazing and damage of the prairies. In years past, the agency has captured the animals using helicopters or bait traps, then released them to private owners or other rangelands.

The horses are protected by the Wild Free Roaming Horses and Burros Act passed by Congress in 1971, which designated the BLM as the federal management responsible for managing the horses.

Kahrens and the Cloud Foundation, a Colorado-based horse conservation group, filed suit against the U.S. Department of Interior Secretary Ryan Zinke, who oversees the BLM, on Aug. 17.

“I hope this is a turning point for America’s beleaguered wild horse herds that have been so cruelly treated, and that the BLM will finally adopt human methods of management that take into account the essential need for family structures and the basic right to live in freedom as the Wild Horse and Burro Act intended,” Kahrens said in a written statement.

MTN News sent a request for comment to the Department of Interior press office and will update this story with any response.