If you are paying to park in one of the two residential areas in Bozeman, you’re about to see the cost of permits go up.

That includes near Bozeman High School or Montana State University in a few different neighborhoods.

If you live there, you probably have to pay a $25 annual fee to get a permit that lets you park on the street. 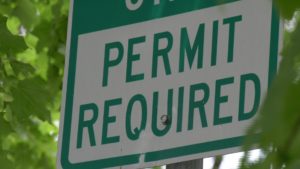 But the Bozeman parking program manager says the division is still in a deficit.

So that cost will go up.

“We don’t want to try and go a huge chunk all at one time,” says Ed Meece, Bozeman Parking Program manager.

For Meece, that’s the goal.

For anyone who regularly has to park under the green signs, that could mean another thing: paying more money.

“They’re about a $44,000 deficit, meaning that they cost $44,000 more to administer and enforce the districts than the revenue that they bring in,” Meece says.

Meece adds up until about two years ago, parking districts have been consistently in the red.

When asked for how long, he says no one really knows.

“For many, many years, the districts existed with a $10 a year permit fee annually per permit, and so a couple years ago, we began to look real seriously at all of the rates,” Meece says.

The recommendation: $5 more per year, with small increases in the future.

The parking program manager says while these increases for these permits doesn’t quite get rid of the deficit, he says that at least it narrows the gap between the red and the green.

“Because this was left alone for so many years, the staff is not proposing to take it all back at once, but certainly we want to continue to gain ground on a consistent basis,” Meece says.

That includes a new $10 annual permit for unmarked service cars, like plumbers and electricians.

That way, parking permit districts meet the Bozeman City Code, paying for themselves.

Meece says with a plan now firmly in place, that can happen.

“That’s what I think the commission and the parking services division at the City of Bozeman are trying to do is just strike a good balance,” Meece says.

Meece adds the parking commission’s resolution, which was passed by the city council, will be heading to the city commission in July since the renewal period for these permits is in August.

That’s when this will all take effect.