Remembering Mason Moore: The man behind the badge

Because of House Bill 156, passed by the 2019 Montana Legislature, a sign now stands at mile marker 109 as a reminder of the man behind the badge.

Moore was remembered Friday as a father, husband, and hero, at a dedication ceremony where the sign was revealed. 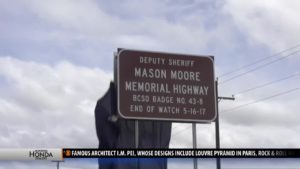 His name, badge number, and end of watch are all included on the sign.

Moore’s wife Jodi said the sign is a reminder his life mattered.

“This is not where evil won,” she said. “This is where Mason won.”

Rep. Julie Dooling, the bill’s sponsor, said she hopes the marker is a reminder of the sacrifice law enforcement make every day.

“It’s a bittersweet moment,” said Dooling. “We’re glad it’s this far, but at the same time Jodi and the kids still have a long road ahead of them.” 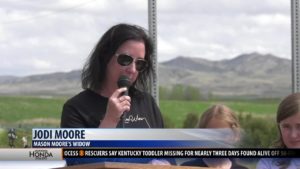 “For the men and women in uniform, it’s one of those things, I was there that day,” said Broadwater County Sheriff Wynn Meehan. “For the traveling citizen, they’ll stop and say, a law enforcement officer died here.”

Copyright 2023 Scripps Media, Inc. All rights reserved. This material may not be published, broadcast, rewritten, or redistributed.