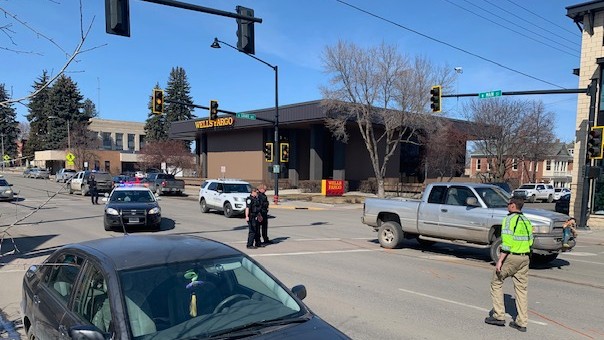 BOZEMAN, Mont. – We now know the name and the condition of the man that was hit by a truck while walking across a Downtown Bozeman crosswalk yesterday.

The family of 82-year-old Paul Wylie says he was airlifted to Billings after suffering serious injuries.

Police are not releasing any information at this time but we do know that the incident happened at the intersection of Grand Avenue and Main Street.

An officer on scene says a female driver of a silver Dodge pickup was turning onto Main Street while Wylie was in the crosswalk.

Wylie ’s family tell us he is recovering, although he is suffering from several broken bones and severe head injuries.

Again, police are not releasing any further details at this time.

While the investigation continues, city leaders and businesses say this is a reminder of safety concerns with foot traffic downtown.

“The pedestrian has the right of way and it’s not the case all the time,” says Cara Wilson, general manager of Knife Bistro.

Painted marks on Main Street are the only indication of a much-different scene Monday morning, something that weighs on the mind of other businesses at similar intersections nearby.

“A really good friend of mine not too long ago was involved a hit and run as she was walking, and the guy didn’t even stop. And she actually had some pretty serious injuries after the fact so it’s a bummer,” Wilson says.

Wilson adds what happened Monday has her and others keeping a watchful eye.

“I got a little dog and we are walking around all the time and you definitely have to keep an eye out for traffic and just not always trust the crosswalks, stop and go and whatever the light says,” Wilson says.

“The accident is very unfortunate and we just look at what we can do to try to minimize those incidents,” said Chris Naumann, executive director of the Downtown Bozeman Partnership.

Naumann says its cases like this that the city hopes to avoid.

“It’s the most pedestrian-used area of the city so we’ve got upwards to 12,000 vehicles on average, a day, traveling on Main Street and, in certain seasons, we’ve got as many as 5-to-6,000 pedestrians,” Naumann said.

He said while it is also pretty easy to see, it is very busy downtown all the time.

With more drivers just making their way through, knowing when to use the crosswalk is important.

“The number one mobility goal is to prioritize people in all transportation decisions, and the second goal is to calm traffic for safer walking and biking, but it also makes it safer for vehicles,” Naumann says.

That way, he said, people walking into town can trust the right-of-way, as they should.

“We want folks to come downtown, whether they are on foot, by bike or by car, but we want everyone to be aware of one another, slow down,” Naumann said.

“Make sure you are double-checking and looking all around you,” Wilson said.