BOZEMAN, Mont. – Drivers on North Yellowstone will notice orange, yellow, white and blue striped and polka-dot paint at two intersections along the street. The temporary paint job is a project aimed at slowing down drivers while also gathering data to see if a permanent fix is needed.

“It’s eye catching and that’s what makes them effective,” said Dani Hess, Project Assistant at Western Traffic Institute. She says the street calming project is a combination of city, private and volunteer efforts. 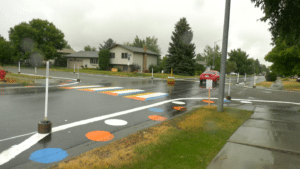 Paint was supplied by the City of Bozeman, but the painting was done by neighbors who have been pushing for change along the street to slow down speeders.

“People want stop signs or signals but signals or signs are actually less effective at slowing down traffic than people think,” said Hess. She says drivers often try to make up lost time at intersections by speeding up after they’re free to continue on their route.

Hess says before the paint job was done, data was collected with speed readers placed along the street. They hope to compare the data collected while the temporary paint is still on the street and compare the sets of numbers.

A permanent fix would likely include widening the sidewalk and narrowing the intersection rather than adding a street light or stop sign, according to Hess.

The temporary paint is expected to fade after the second or third snowfall.