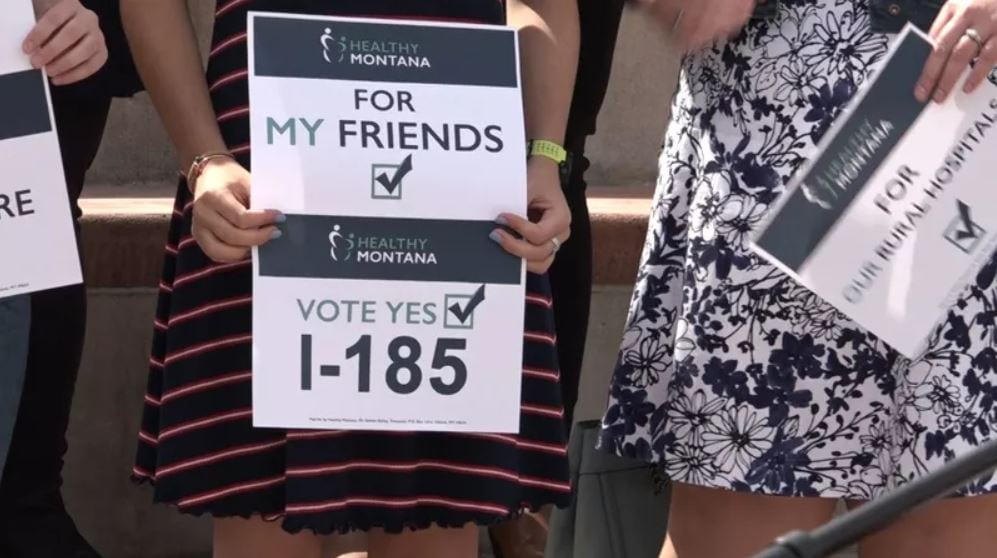 The contributions last month from Altria Client Services, the makers of Marlboro cigarettes, and RAI Services Co., which makes Camel cigarettes, make the battle over I-185 the second-most-expensive campaign this year in Montana, trailing only the U.S. Senate race.

MATH reported this week that it spent $3.5 million during the month of August, including more than $3 million on TV, radio and digital ads – and it still had $4.2 million in the bank as of last week.

So far, Altria has put nearly $4 million into the campaign and RAI has contributed almost $4.9 million.

Supporters of I-185 said “big tobacco” is spending big money to protect their profits “at the expense of healthcare for 100,000 Montanans” – a reference to the number of people covered by expanded Medicaid.

“It’s clear that the world’s largest tobacco corporations are willing to stop at nothing to protect their profits,” said Amanda Cahill of the American Heart Association-Montana.

Officials with MATH couldn’t immediately be reached for comment.

Supporters of I-185, however, haven’t been sitting on their hands when it comes to money, either.

MHA, the state’s hospital lobby, contributed $962,000 last month to the ballot committee supporting I-185, bringing the total support of MHA and individual Montana hospitals for the measure to nearly $1.3 million.

Other entities supporting I-185 include Families USA Action, the American Cancer Society-Cancer Action Network, the Montana Human Rights Network, Planned Parenthood of Montana, and several health-care and low-income groups. All told, the supporters of I-185 have put $2 million into their effort, through the end of August.

I-185, if passed, would increase state taxes on cigarettes by $2 a pack and hike wholesale taxes on other tobacco products by 67 percent.

It also makes permanent Medicaid expansion, which provides virtually free health coverage to 100,000 low-income adults in Montana and brings hundreds of millions of federal dollars into the state. Medicaid expansion is set to expire next June in Montana unless the Legislature or voters extend it.

Money raised by the higher tobacco tax would help fund the state’s share of Medicaid expansion, which is financed primarily by the federal government.

But the taxes raised by I-185 don’t go entirely to Medicaid expansion and wouldn’t cover all of the state’s share.

Opponents of I-185 have seized on this point in their ads, saying the measure creates an “unfunded mandate” by extending Medicaid expansion.

Revenue raised by I-185 also is earmarked for tobacco-prevention programs, veterans’ programs, assisted living programs for the poor and the state’s general treasury.

Copyright 2023 Scripps Media, Inc. All rights reserved. This material may not be published, broadcast, rewritten, or redistributed.