Over the past couple of days, the girls have campaigned for elected positions in a model of the Montana government.

Those that were elected to the Supreme Court had a unique opportunity that only a few others have had the honor of doing; wearing the robes that were previously worn by Montana’s female Supreme Court Justices.

In the Old Supreme Court Chamber at the State Capitol, Montana Supreme Court Justice Beth Baker swore in the seven Justices of the 2019 Girls State.

The robes that the ladies will wear are the same that were worn by the female Supreme Court Justices that have served on the bench in Montana. 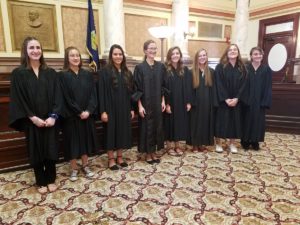 “It’s honestly such an honor,” said Madill. “When we came in and they told us we were going to be able to wear the same robes that were previously worn by Chief Justices and Supreme Court Justices, I was shocked because I didn’t know I would have had such a great opportunity.”

Madill was elected Chief Justice by her peers on a promise of making rulings with leadership, equity, open-mindedness and patience.

“I think those four pillars reflect very well what a judge should bring to the bench in any court,” said Justice Baker.

The Montana Supreme Court Justice said it was a privilege and honor to participate in Girls State and speak with the young women.

“To look out in the House Chambers of Montana and see a sea of female faces is a pretty fun experience,” said Justice Baker. “As I told the girls, it’s important for all young people to understand our government and how it works, and I think it’s very important to get young women involved in civic leadership.”

The Girls State Justices will hear a mock trial on Thursday and Friday involving a girl that died in a hazing ritual.

It will be up to them to determine if the death should be ruled a homicide or an accident.