Father and son spread happiness, one crazy pair of socks at a time

HUNTINGTON, N.Y. — On Long Island, John Cronin is building a business with his dad, handling all sorts of jobs. That leaves Mark, his father, proud but not surprised. He knew John, who has Down syndrome, wouldn’t have to live within the limits that others might assume he would.

"He came to me and said, ‘Dad, I want to go into business with you,’" Mark explained.

So 18 months ago, John’s Crazy Socks was born. At $2.5 million in revenue so far, they’re doing well. And with differently-abled workers holding down 16 of the 35 jobs they created, they’re also doing good. 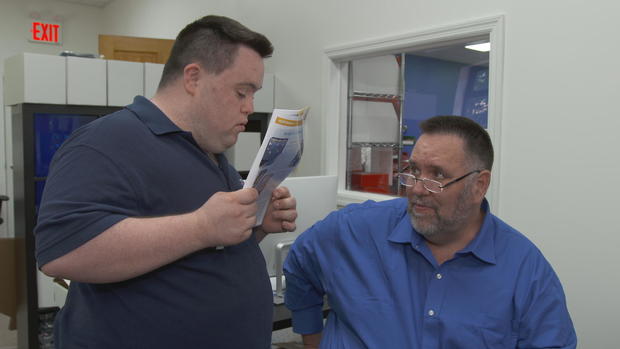 "They’re excited to be here. They have great skills and a great spirit," Mark said of his employees.

Certain socks are linked to certain charities. Each pair sold generates a donation, resulting in $100,000 and counting. While YouTube and social media have helped spread the word, their most famous customer put them on the map: former President George H.W. Bush, who signed the Americans with Disabilities Act into law in 1990.

"On World Down Syndrome Day, he wore John’s Down syndrome superhero socks and sent out a tweet of him wearing them and thanking his friend John Cronin," Mark said.

Yesterday I was inspired by my friend John Cronin to wear these beauties from @JohnsCrazySocks marking World Down Syndrome Day. A great sock supporting a wonderful cause. #johnscrazysocks #worlddownsyndromeday #happiness #downsyndrome pic.twitter.com/3ulu8ORsta

That was good for business. But when the 41st president wore a pair of John’s Crazy Socks to pay tribute to Barbara Bush’s literacy campaigns at her funeral, that was good for the soul.

"It made me feel good. Everyday it makes me feel happy," John said.

While the Cronins see money in warm feet, they’re about to corner the market on warm hearts along the way.

To learn more about John’s Crazy Socks, head to their website.