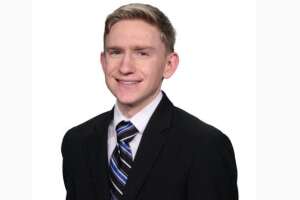 Carson joined the KBZK and KXLF news team in January of 2018 as a weekend meteorologist and weekday reporter.

Carson was born and raised in Texas and is very proud to be a native Texan from the Dallas area. He knew he wanted to be a meteorologist from a very young age. The severe thunderstorms, hurricanes, and occasional ice storms that Texas had to offer sparked his interest in the science. Carson would watch the Weather Channel for hours during major storms throughout his childhood. Carson ran cross country and track through middle school and high school. Little did he know, his two passions would be combined at a summer track meet in West Texas. After competing in the mile in the afternoon, the skies darkened as a storm approached. While driving away, Carson noticed a funny looking cloud in the shape of a funnel. Seconds later, a tornado was reported on the radio a couple miles from his location! This only confirmed his interest in Meteorology.

While he was born in Texas, he attended the University of Kansas in Lawrence (rock chalk!), where he earned his B.S. in Meteorology. While attending KU, Carson was a division I athlete for the University’s track and cross country teams. He also worked as a fill-in meteorologist at 6NEWS in Lawrence, KS and was a meteorology intern at WFAA-TV in Dallas, TX, and KSNT in Topeka, KS. Influenced by his cross country and track and field career, Carson coined the social media handle, worldsfastestweatherman on Facebook.